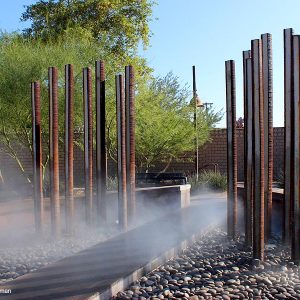 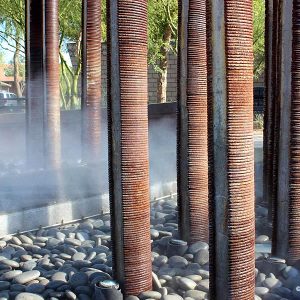 This may be Arizona’s only non-equestrian equestrian monument! The iconic shape of the horseshoe representing the strength and stability of the West is the central form of this downtown rest stop.

Created in 1999 by artist Michael Maglich, tall pillars made of stacked horseshoes stand within a horseshoe-shaped concrete seat wall. Dense fog periodically rises from a bed of river rock and cools the space for passing pedestrians and cyclists taking a moment to pause.

About Michael Maglich
Born July 1, 1945, in Buffalo, New York, Michale Maglich was six months old when his family relocated to Phoenix. He graduated from the prestigious Chouinard Art Institute in Los Angeles, CA in the 1960’s, which later became the California Institute of the Arts in 1971. In 1982, Michael returned to Phoenix and in the early 1990s, he began creating public commissions including, Arizona Bolas, a series of 59 bronze sculptures installed in 1995 at the Phoenix Convention Center, Cereus Mechanicus, a 2004 sculptural installation for the Cactus Garden at Sky Harbor Airport, and The Sirens of Highway 60, commissioned by the City of Tempe, in which 180 small siren figures, based on a bronze from the Getty Museum, are captured in flight on either side of the freeway. Maglich passed away in 2007.