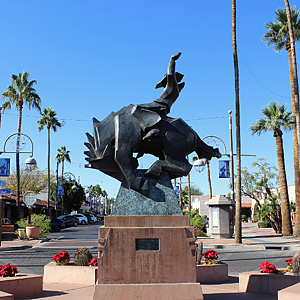 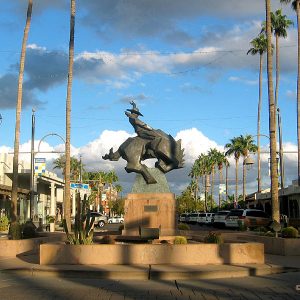 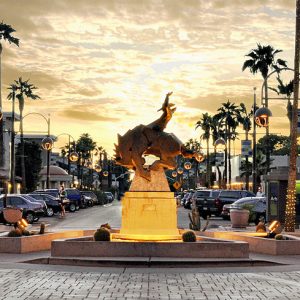 Created by artist Ed Mell, the bronze sculpture Jack Knife stands over eight feet high on its base and is modeled after Scottsdale’s official city seal, a rider astride a bucking horse.

“Jack Knife has a reverence for the Old West. It is not traditional, but yet it has a traditional theme. The angularity accelerates the power and energy of the rider and horse, more than accurate depiction.” –Ed Mell

About Ed Mell
Born in 1942, Ed Mell spent an idyllic childhood in what was then the small western city of Phoenix, Arizona. He began drawing at a very early age, inspired by the automobiles and futuristic design of the late ‘40s and ‘50s. After attending Phoenix Junior College, a burgeoning interest in advertising and illustration led him to attend Art Center College of Design in Los Angeles. Although an advertising major, he was still able to vicariously experience the school’s world-renowned automotive design department through several of his friends.

After Los Angeles, Ed went on to work at Young and Rubicam, one of the top advertising agencies in New York, and Kenyon and Eckhardt where he worked on such major accounts as Helena Rubenstein and Air France. Finding art directing creatively stifling, he moved onto illustration, becoming one of the first airbrush artists to emerge in the 60’s. His skill in this newly rediscovered medium attracted clients such as Tang and National Lampoon, the latter of whom he did two covers for.

It was after two summers teaching art on the Hopi reservation that Ed decided to return home to Arizona’s Sonoran desert. “Spending months in that beauty right after being in the city was the catalyst that changed my artistic direction.”

He has primarily been a painter and illustrator but began making bronze sculptures in the ‘80s. His work is in many corporate and private collections, nationally and internationally, including China and Mexico. Some of the collectors include Diane Keaton, The Forbes Collection, and the Anschutz Collection. The Phoenix Art Museum, Tucson Museum of Art and the Denver Art Museum, all permanently own his work.

Several other large-scale works have also been commissioned by public works, including a mural painting for the visitor’s center of Kartchner Caverns, and a bronze of a rising phoenix for Phoenix City Hall. In 1996 his life as an artist was chronicled in the Northland Press book “Beyond the Visible Terrain: The Art of Ed Mell.”